Whew! Petrini week is over.  Three days that felt like a week, but it all went beautifully.  Monday was like a normal Friday for us as we harvested almost as many vegetables for the CEFS-Slow Food picnic as we would in getting ready for the Saturday market.  The staff worked a full day (Mondays are generally half days) to make sure we could get everything done because we had lunch guests coming the next day.  You may remember in last weeks newsletter that Carlo Petrini and his Slow Food compadres were going to tour some farms around the area, well we found out on Friday that not only was he going to come see us but also have lunch here on the farm!  Lunch here?  I wondered how the founder of a movement that “celebrates the pleasures of the table” would feel about peanut butter and jelly sandwiches.  We had a plan, call some one else to help!  It’s not that Betsy and I aren’t good cooks with plenty of great material to work with we just had a few more things going on like helping with all of the events including donating all the flowers for them, oh and we had a farm to run.  We have several good friends who are excellent cooks that we could call on but our first call was to Anne Everitt who you may remember used to be the manager of the Farmer’s Market as well as pastry chef at Elaine’s and Lantern restaurants.  Anne immediately swung into action designing a simple but refined menu using mostly Peregrine Farm ingredients along with other local and NC foods.  With the help of Amy Eller, formerly communications director for the Carolina Farm Stewardship Assoc., they took over our kitchen and chopped, sliced and washed there way to an extremely tasty meal.  The next day, when asked by a reporter what was the best meal he had eaten on his three week tour of the US, he said he thought it might have been the lunch here at Peregrine Farm!

By 1:00, when they arrived, the table was set up under our former pick your own stand in the shade of the huge tulip poplar trees with views of the farm.  We took a short walk around the farm and then retreated to the lunch, Italian style.  We had good discussions with all the Slow Food folks about this area and how lucky we are to have great markets, customers, non-profits and lots of small farmers.  More importantly we were able (Betsy in her hard earned Italian) to speak privately with Carlo about our Italian farm family and their struggle to keep there farm from being sold out from under them.  Their situation is a long and complicated story but since last fall we have been trying to enlist Mr. Petrini’s help.  He is a very influential figure in Italy especially the Piedmont region where our friends farm.  If we could get him to say a few words to the right folks in the regional government it could save their farm of five generations.  He said he had received our letter and had called the regional President but that it was messy situation.  He then promised to contact our friends when he returned to Italy to get the whole story.  At that point he pulled out his cell phone and dialed their number (which Betsy just happened to have in her pocket)…they did not answer.  We feel sure that he will contact them and help when he gets back to Italy!

The rest has been a whirlwind.  As soon as they left the farm we had to rush over to the picnic to get set up including all of the flowers that Betsy, with the great help of Jennifer Delaney, had arranged.  A very enjoyable event with great food and everyone really seemed to enjoy it.  It was hard to believe that there were almost 400 people in that field.  Mr. Petrini and friends seemed to have a really good time and were (I think) further amazed at our local food community.  Yesterday the drum beat continued.  Get ready for the Wednesday Farmers’ Market, which the staff was to be dispatched to while Betsy and I headed to Raleigh for the final two Petrini events.  We had to arrive to the reception early to set up the flowers there too.  The Friends of CEFS reception was well attended which then flowed next door to the final event, Carlo’s presentation about the meaning and value of preserving food traditions, defending biodiversity, and protecting food that is good, clean and fair.  Nearly 1000 people were in attendance, and even though he spoke with an interpreter, they all seemed to take away some important messages.  With it all over we limped home.  We didn’t mange to get any pictures but friends where taking lots so hopefully next week we can have a Carlo Petrini picture of the week. 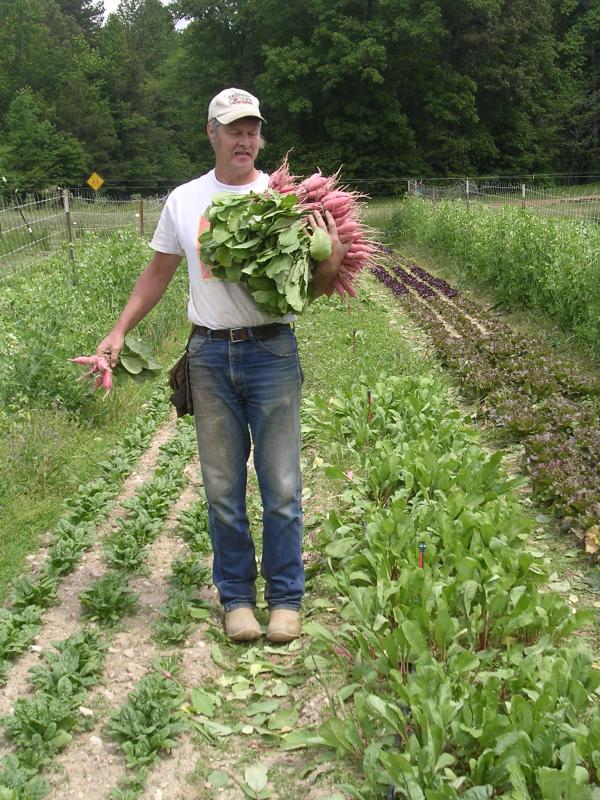 An armload of radishes