The sprint is on now, the blueberries are beginning to ripen and the urgency to get other things done around the farm before we are all lost to berry picking is keen.  This is one of those transition weeks in the season when old crops begin to wane and the new ones are beginning to flex their “you need to come work in me” muscles.  Thankfully this is the last week and fifth week of wholesale lettuce deliveries to Weaver Street Market.  For seventeen seasons we have grown all the spring lettuce for Weaver Street and it dictates the pace of my spring work.  We plant nearly 9000 heads beginning in early February, covering, cultivating, irrigating until the late in April when I cut lettuce four mornings a week.  Monday and Thursdays are the large harvest days for the stores.  Early in the morning I call and get the orders from the produce departments so I can start cutting first thing when the lettuce is cool and with dew.  Most days it is twelve to sixteen cases, 24 heads to a case, some days it can be twenty or more.  It is the one thing on the farm that only I harvest, there is an eye one has to develop to know that the head is big enough for the stores.  I fall into a steady routine, Red Leaf is first as it is the most heat sensitive and usually I have to cut the most of it for the orders.  I move right to left down the beds after I cut a number of heads out to have a place to set the crate.  The lettuce is three plants across the bed and hopefully they are all the right size otherwise there can be substantial skipping around.  Cut the head off with the special lettuce knife at the base and then inspect the head for quality, peeling off a few of the old outer leaves, littering the ground around my feet with them.  The first layer in the case is three rows of three, layered in like singles; then layer of six heads followed by the final layer of nine.  I can barely get 24 full size heads in a case but do, carry it to the back of the truck, snap the lid on and pick up another empty crate.  Green Leaf follows next, then the Boston, Romaine is always last.  Romaine can take the heat better and is the easiest to cut and clean when I am getting tired.  When it is really large I tell myself it is like cutting down redwoods.  If the planting is really uniform I can cut ten cases an hour, fifteen seconds a head.  When I have to skip around it slows me down to six an hour.  With the days order cut I pull the truck down into the deep shade for a few hours before I take it into town.  Wednesday’s and Friday’s cuts for market are smaller only around eight cases but still the same.  After five straight weeks of wholesale lettuce I am ready to do something else every morning, it’s time for the season to change.

Big day yesterday the turkeys moved to the field.  The first time a batch of turkeys is exposed to something new they get crazy, this group seems especially jumpy so we have been careful in this big transition to the outdoors.  First we let them run in and out of the brooder to the field shelter just to get the hang of it.  Then we move the field shelter further away from the brooder and put food and water in there.  Finally we close the brooder and make them stay the night in the field shelter.  This group has not been high on the scale of early adopters, plenty of distress chirping and generally not getting it at first.  On field moving day we have to catch each one and carry it to the new field where we have moved their familiar feeders and waterers, lots of panic and chasing around.  Once they are all in the new field we move the field shelter (the new mothership) into the field and leave them alone for the rest of the day.  We were worried that come night fall we would be herding them around to get them into the shelter for the night, not being the highest achieving group.  Hallelujah, at dark they were all self loaded and we just had to close the door!  Transition complete. 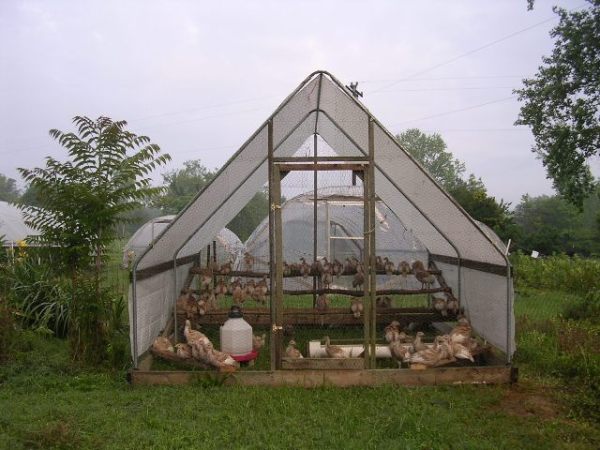 Cozy at first light, waiting to be released for their first full day in the field