This is the time of year that we are always tieing something up.  Many of the summer crops need “assistance” standing up, so over the years we have developed multiple ways to trellis them.  Trellising takes extra time and labor so we only do it for certain crops that really need it.  Tomatoes, peppers, cucumbers and pole beans in the vegetables along with lisianthus, sunflowers, celosia, delphinium and a few others in the flowers.  Besides making it easier to harvest them because they are up off the ground it also gives us better quality.  Straight flower stems with clean blooms are Betsy’s goal, those S shaped sunflower stems may look cool but most folks won’t buy them.  In the vegetables it also give us nice clean fruit but also allows for good airflow around the plants so they dry out faster in the mornings after a rain or heavy dew.  Most of the diseases that affect these crops are a fungus or a bacteria, warm wet conditions are perfect for them to go wild.  If we can get those plants up into the breeze then we can slow down the inevitable spread of these diseases.  So we have come up with a set of trellis designs that can be put up fast, do the job and then come down just as fast.  I am the king of metal T-posts, electric fence wire, a few pieces of 2X4, baling twine and some kind of mesh either plastic or metal.  Sounds just like a farmer, a job is not worth doing if it doesn’t involve some electric fence wire, baling twine and maybe some duct tape.

Early in the year the staff is gradually trained in how to build the various “styles”.  Heavy duty tomato trellis with metal fencing hanging off of six foot T-posts, strong enough to bear the weight of nearly 1000 pounds of fruit and vine per 100 foot long row.  Then the wispy pea fences of plastic mesh hanging off the same post set up, just enough structure for them to grab onto with their tendrils and light hollow stems.  Soon they move to the graduate courses in trellising, horizontal structures that float over the rows on cross arms attached to… metal T-posts.  First the plastic flower netting placed just above the growing and budding plants so the weight of just the heavy blooms are supported as they grow up through it.  Finally the two and three level condos of trellises, the pepper array.  A lower level of baling twine run on either side of the little ten inch tall plants to keep them upright in the summer storms.  Then another layer eighteen inches above that of wires and baling twine to catch the branches as they grow up through it to support the weight of the growing fruit, really tall peppers like poblanos get a third, pent house layer at almost four feet above ground.  Cov and Elizabeth are now certified trellis technicians, with almost 6000 feet of construction behind them.  This week the last 500 feet of tomato trellis and the first layer on the pepper trellis.  A friend once said my tombstone would read “He was an OK farmer but he sure could tie things up”. 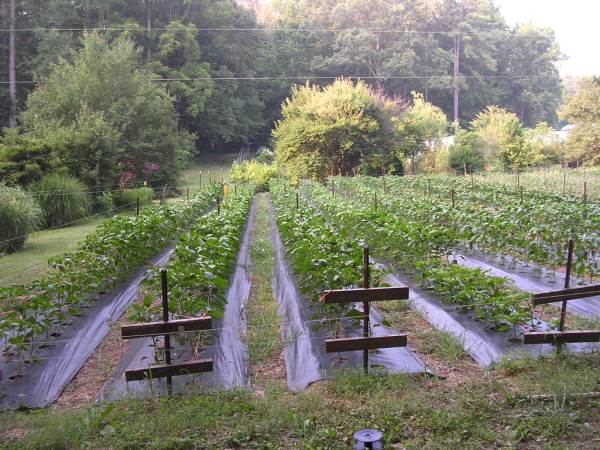 Tomatoes reaching for the sky and nice straight peppers