What a glorious morning, just came back in from my morning perambulation (letting the turkeys out, turning on irrigation, general perusal of the place) and the 50 degree temperature that greeted me was almost shocking.  Thank goodness we are near the longest day of the year (and the first day of summer) because this waking up at 5:00 a.m. is not natural.  I always wake with the light and it is just not right to be up this early in the day!  The change of seasons is truly upon us as we are mowing down the spring vegetable and flower crops and planting more of what will be the late summer crops.  Under the tiller go the beet, carrot, spinach and lettuce beds making room for more zinnias, sunflowers and celosia.  We covered the last bay of the Big Tops last week and the guys built their last tomato trellis of the year.  Today we will plant the last round of tomatoes, the ones for August and September.  We do this planting no-till into a rolled down cover crop of grain rye and this year Austrian winter peas, just like all of the sweet peppers.  When we plant the sweet peppers we are always pushing the front end of using this no-till system because the cover crops are just barely mature enough to kill and the soil is still almost too cool under the insulating layer of mulch.  With the late tomatoes it is just right because the cover is well dead and the soil is warm but not hot.  Most farmers will plant their late tomatoes into white plastic in an attempt to keep the soil and the plants a little cooler, besides my disdain for using plastic mulch, we already have those conditions using the no-till.  Even with these more ideal planting conditions we only plant a limited selection of varieties because tomatoes don’t pollinate well in the hot nights of July and August so we only plant five beds and four varieties, a red, a pink, a yellow and of course Sun Gold cherries.

We really need some rain right now, not only is the pond going down but it is time to seed the summer cover crops.  As I was tilling yesterday the soil is getting very dry making it hard to incorporate the crop residues and difficult to germinate the new seeds.  This is beginning to look like last year where it was almost impossible to get the summer cover crops going.  Now that blueberry picking is almost over we are turning our attentions to catching up on all this planting, trellising and spring crop clean up, hopefully today we will also start the pepper trellising as those poblanos are getting tall and susceptible to being knocked over in a storm.  Friday we will begin the annual red onion harvest another sign of summer as right on cue the onion tops are flopping over, telling us it is time to get them out of the ground too.  As Betsy says, it’s like being a chicken on a hot plate, how fast can you dance? 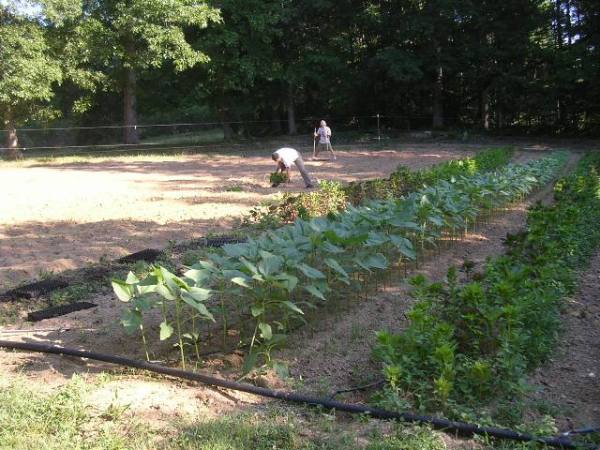