Well the break is over and we managed as relaxing a time as we have ever had during “the summer break”.  There is usually a little too much farm work to do to really feel like we had time off.  This time though, while we did go out every morning and do some chores for a few hours, it was never a forced march.  Dan did come out on Wednesday to help me pick tomatoes so we could do a small delivery that day and because it had to be done.  Wednesday was really the only real work like day though.  We lounged around in the air conditioning and watched movies, went out to eat almost every night  (and many lunches too!), I even got to run up to the mountains for a night and just sit and look at the view.

The highlight though was definitely the 90 Indian civil servants who arrived on Tuesday afternoon in two buses when it was 98 degrees!  This group of officials from the Indian Administrative Service, which is the highest  tier of civil servants in that country, was here for two weeks hosted by the Duke Center for International Development.  While in North Carolina they were studying how government policy relates to service delivery and infrastructure development.  One of the things they specifically asked us for was to see some US farming techniques.  Now we have hosted a lot of tour groups over the years and many from foreign countries but this group was unlike any other!  They were like a fourth grade school field trip with their energy and questions.  As they rolled off the buses they immediately surrounded Betsy and me and started rifling questions as fast as we could answer.  No subject was passed over.  How long have you been farming, what is that crop, how do you irrigate, what is your income, how many taxes do you pay, where to you sell your crops, and on and on.  Betsy’s favorite question was do you sell to Walmart?  There was no organized guided tour as they were all over the place and then 45 minutes later they were on the bus and gone.  Wow, did that just happen?  It was so much fun that we told the Duke organizers to bring more!  Next up in a few weeks Chinese officials.

Now it’s back to the salt mines, but the end is in sight.  We even began the long dismantling process yesterday, taking out the first flower trellises and pulling up irrigation lines.  We are very glad to see some rain moving in today because thing were beginning to get crispy again.  One note, our Panzanella/Weaver Street Market farm dinner is this coming Monday the 18th from 5:30 to 9:00.  The menu will be pepper and tomato heavy, perfect!  I am hoping for a stuffed poblano and probably a fresh tomato sauce on pasta among others.  I believe that 10% of the proceeds go to the Center for Environmental Farming Systems.  Hope to see you there. 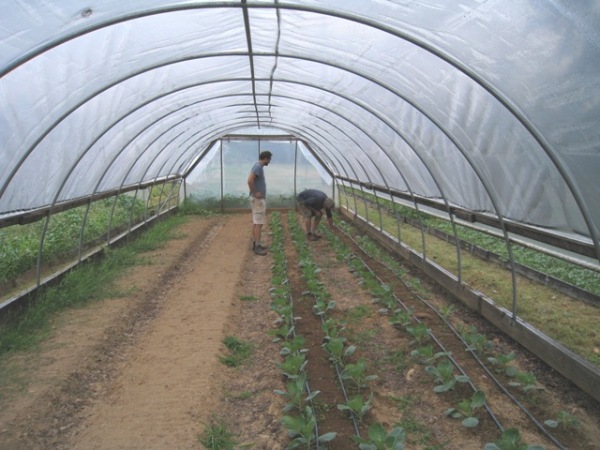