Wow! has it really been two whole months since the last newsletter?  We have been running hard and fast as well as having lots of fun!  The trip to Holland and Italy was very informative and beautiful.  The week we spent in Holland was mostly focused on cut flowers but we did manage to go to several markets looking for new and unusual things.  We were able to visit with many farmers and plant breeders and I think that Betsy has found a few new things to try.  The horticultural trade show was over the top!  Dutch agriculture is so fastidious and high tech that I can’t even begin to approach that level of obsession!  Italy was much more relaxed and we didn’t get on as many farms as we would have liked to but still saw many new things.  Our Italian family, that we stayed with last year when we went to the Terra Madre Slow Food event, was great and Betsy’s hard work at learning Italian paid off in much better understanding of each other.  We rented a car this time and spent many days driving through the countryside and going to markets.  We found a few new ideas that we will try and incorporate here this year.  One of our missions was to go to the Slow Food headquarters in Bra, Italy, and visit with the people who are organizing the next Terra Madre conference for next fall (2006).  It appears as if we will be able to go back again, Betsy has even volunteered to help with whatever they need including some basic interpretation! 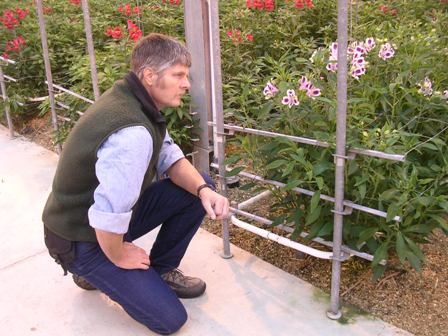 Alex amazed at the technology!

Here are the farm we got all of the soil preparations for the winter finished with near perfect results, never has all of it worked up so beautifully with the exception of this on going dry spell.  The cover crop seeds that I planted a month ago have just barely sprouted.  We are running that fine line now of getting them established before the really cold weather sets in, which can kill them before they have enough roots underneath them.  The turkeys went in for processing before we left for Europe and came out looking good.  The Heritage birds were slightly smaller than last year and the Broad breasted Bronzes were also smaller which is great for those of us who don’t normally eat 26 pound birds!  The flash freezing process went smoothly and they came home yesterday in fine condition.  The processing plant project goes on and on.  In general it is working about the way we had hoped for but every day there is something that breaks down or needs to be worked on.