Rain, that is what has been going on.  7.3 inches this month.  Not as much as many other folks have had but wet just the same.  When we first moved to the farm in 1982 we lived in a tent for eight months while we began to develop the farm and build the first part of the house.  We had planted 5,000 berry plants in March and struggled through a very dry April to keep them alive.  We would fill five gallon buckets, by hand, out of the pond put them on a trailer behind the tractor and slowly drive up the hill to the field and hope that all the water wouldn’t splash out on the way.  We would then carry those buckets up and down the 20,000 feet of row and pour a little bit of life giving water onto each one.  Finally in late April the irrigation company we had contracted with to install our system arrived and we spent three very long days running thousands of feet of two inch PVC pipe up to the field to carry the water to the drip lines that we buried down each row next to the plants.  I always joke with folks that we lived in a tent while we put in $6000 worth of irrigation and I am still married to the same wonderful woman!  Now we could water all those new berry plants and our future.  In May it began to rain.  Every day we would stand under our little twenty by twenty tin roofed tractor shed/kitchen/world headquarters and watch as the rain dumped down on us.  The dirt track that ran past the tent and shed would run like a river and the lightening would shake everything around us.  The month ended with seventeen inches of rain!

Out in the field the plants were now happy but so were the weeds that we had unleashed by turning over soil that had held the weed seeds for years just waiting for someone to come along and bring them to the sun.  The May rains gave them extra vigor and we saw our berry plants disappearing into the jungle.  I carefully worked my way up and down the four miles of rows and hand weeded a cylinder around each plant after I found them first.  It was a race as the weeds: lambsquarter, pig weed and ox-eye daisy grew to head high.  I finally got on the tractor and stood on the seat so I could look down and find the cylinders I had created around each plant as I carefully mowed the aisles between the rows.  The battle with the weeds carried on through out that first summer (and still continues today) but we had saved the crop.

Fortunately we are going to have a dry spell coming the next five days or so and we will be able to get in and start to fight the weeds back.  We now have more equipment and tools and more help to do it with.  After years of cultivating, hand weeding and rotating crops our weed seed bank is not what it used to be but just letting a few big ones make seed will set a portion of a field back five years, so we are ever vigilant.  There is a section in the new Zinnias where it looks like we spread grass seed with a butter knife, or spray painted the ground green.  Last year we had Dahlias there and couldn’t till or mow the grass in them and couldn’t keep up by hand so some grass went to seed anyway.  We may end up mowing those Zinnias down early so that grass can’t make more seed, better that than making the problem even worse.  When organic farmers are surveyed about what is their number one problem it always comes back weeds.  It has been that way since man first started farming. 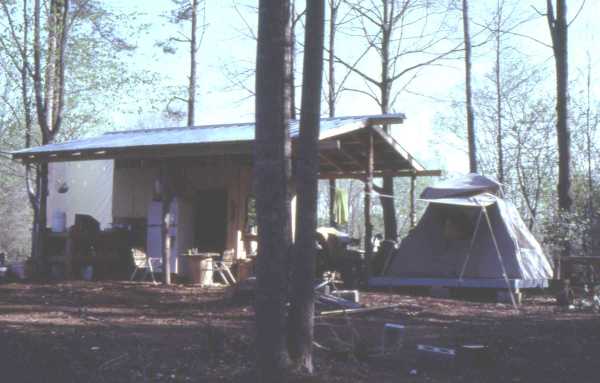 From the archives.  The early camp with tent as bedroom wing, ah the good old days!