One more shot of beautiful cool weather with occasional rain.  I always feel like we are cheating or escaping from something when the weather is like this in June.  I know full well that the relentless heat of summer is hiding just around the corner and then we have to settle into a more measured pace just to make it through until September.  Having been born and raised mostly in the South you would think that I would be used to the heat and humidity but that gene never got passed to me.  When we moved here twenty six years ago from Utah, we lived in a tiny duplex in the middle of a field in Bynum while we crafted the plan for Peregrine Farm.  That first summer, in that non-air conditioned box, was hot as hell and we thought we were going to die!  We would lie awake at night with the tiny window high on the wall above, a box fan feebly trying to move hot air around us.  Thoughts of cool nights in the mountain west would somehow coax us to sleep.  I always assumed that I would acclimate and get used to the heat and while it did happen, somewhat, I still cower when the forecast reads in the 90’s.

The blueberries roll on.  After last years record crop it is hard to judge just how this years will end up.  My best estimate is that we have about a third of last years harvest, maybe half a normal year.  It is hard to say exactly why.  My best theory is that it was so warm this late winter it caused the bushes to bloom very early.  They started in late February and consequently many blooms and fruit were lost to frosts that came afterward.  It makes the fruit that is left a bit larger and maybe more flavorful because they get all the good stuff they don’t have to share when there are too many berries on the plant.  I was told yesterday that our berries were served last week to the former White House pastry chef, of twenty five years, and he said they were some of the best he had ever had!  With not so many berries to pick we are actually able to get other things done on the farm like critical weeding and tying up the tomatoes.  We are also beginning the process of taking out the spring crops to be replaced by summer cover crops or more summer flowers.  Out come the irrigation lines, mow down the weeds and what is left of the spring crop, turn under the residue.  If we are planting another crop then a little feather meal is spread for nitrogen, the bed is tilled again, then a drip irrigation line is buried right down the middle of the bed.  Planting follows quickly behind.  Last week more sunflowers and seven more beds of zinnias (the third planting of the year).  Soon those fields that don’t go on to summer crops will be turned under and sown to big summer soil improving crops.  The next batch of turkeys arrived on cue last Thursday morning.  Forty broad breasted bronzes, all happy and running around in the brooder. 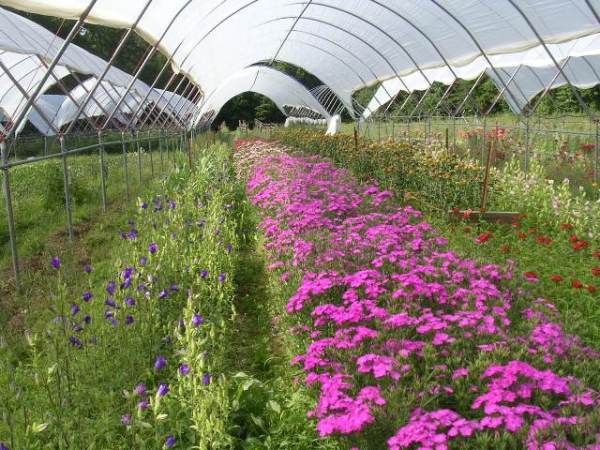