It is amazingly dark these mornings and it makes it hard to get going.  We pulled all the shade cloth off the little tunnels this week because the days are getting so short that the crops that were under the shade get too leggy trying to stretch for the diminishing light.  In August those same crops (lettuce, Brussels sprouts, celery, etc.) can’t take the heat so we give them the extra shade to get them going but with a snap of the fingers it becomes too much shade.  We now know that Labor Day is the changing point and by then the heat has begun to break as well.  Ernesto brought very nice rain without much wind, we had 2.5 inches that came down gently.  Then we had a monsoon type down pour on Monday with 2.5 inches more in about thirty minutes.  The river didn’t rise much and the creek is barely running again but things look much better around the farm, now the ground will not be so dry and I can begin to get soil ready for the fall and winter.  The early tomatoes get taken down today as we have to make way for planting campanula and other flowers for next year and so the preparations for the next season begin in earnest.

This is sometimes a difficult time of year for us as we have one foot still in this growing season, trying to make sure we get everything we can out of the crops that are left, and one foot in the next growing season.  We know that a big part of next year’s success is rooted in what we do over the next few months and so we become a little schizophrenic this time of year as we look way ahead while trying to keep a focus on the last few weeks of market.  This is one of those “sustainability” things that we realized a few years back.  In a conventional farming system the plans for the next growing season or crop only need to be made just before planting happens.  A conventional farmer may make the decision on how much corn to plant based on the commodity market in the spring and then just has to use fertilizer in a bag and plant.  For us the crop rotation dictates what crops go where and how much we will plant is based on what, you, our customers tell us you want.  Most of our “fertilizer” is from the organic matter in the soil that we resupply by growing cover crops in that same soil and then turning them under.  It is a much longer term view of farming.  That is why we stopped raising the fall cool season crops so that we could instead concentrate of getting the farm ready for next year.  Of course being able to go on vacation in October is not a bad side benefit either! 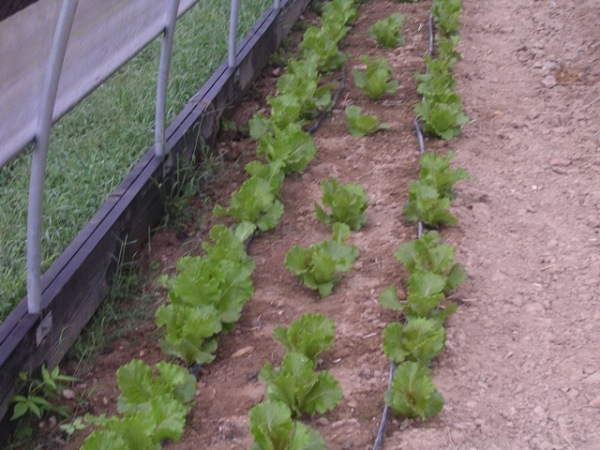 Lettuce started under shade, it will be ready in a week or two