You knew that it was coming, couldn’t go all the way through this warm spring without one last blast of cold weather, are you ready? Lots of people blinked and planted their tomatoes and other warm season crops, now they will be running around today trying to cover them or are just going to take the hit and replant, if they can. The if they can part is the one thing we can’t do. With over twenty varieties of tomatoes, some the only seeds we had, waiting to go in the ground, we just can’t gamble that way. Last week we had moved them all outside to harden off before they went to the field but this would be a little too hard. As it was they went through 29 degrees on Sunday morning and a few got a bit burned even with row cover over them but it was only supposed to be a low of 35 degrees. So with tonight’s low forecast to be 30 degrees here and knowing it can swing 5 degrees or more, we moved them all back into the greenhouse for safe keeping until Friday morning when we hope to finally put them into the ground.

The super early tomatoes in the little sliding tunnels will be just fine and we will protect them with an additional layer of row cover and clamp the plastic down to make them as warm as possible. We have been able to protect them down to as low as 20 degrees, which we had some years ago with the historic Easter freeze in April 2007. Hopefully this will not be as drastic a situation as that was but we are going into it with very similar conditions. So make sure you cover what you can tonight and be wary about tomorrow night too as sometimes we get fooled and the second night is the worst.

All at the same time we are now getting too dry and we need to spend the day setting up irrigation. We wait as long as possible in the spring to install the irrigation because it makes planting and cultivation more difficult once it’s in the way. We spent the last few days doing some final cultivation and now we can start running lines. Drip irrigation lines down every bed, sometimes two on crops like onions. Micro sprinkler lines down every third bed on the greens. Flush the main lines and then attach the headlines that run across the top of every field and flush those, to which we then attach either the drip or sprinkler lines and finally fill them up and make sure they are all working. There has never been a year we didn’t have to irrigate at some point in the season but we always wait until we have to.

First Wednesday afternoon market today (3:30-6:30), it will be cool and breezy but there are good reasons to come out besides the fresh produce. Bill Smith from Crooks Corner will be doing a cooking demonstration during market and then immediately after market there will be a Food Truck Rodeo fundraiser for the Farmer Food Share which is the group that collects extra produce from the Farmers’ market and then distributes it to the food banks and kitchens. Come on out for both the market and the fundraiser, see you there. 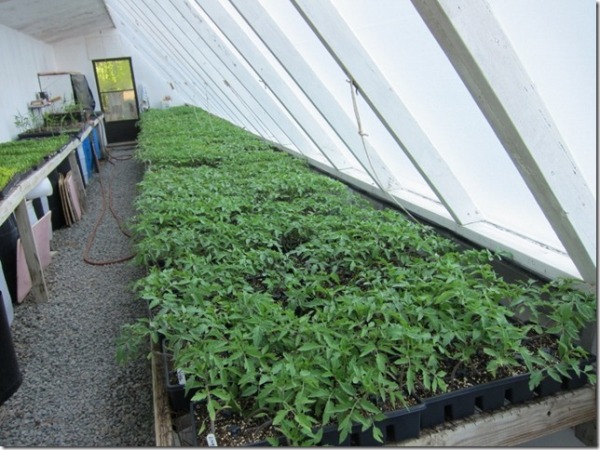 Warm tomato plants as far as the eye can see

This cool weather will slow things down a bit. More beautiful Lettuce with Red and Green Leaf, Romaine and Green Boston. Some more Radishes, Easter Egg and the purple Amethyst. Hopefully a few more over wintered Beets and maybe some Spinach too.

Dutch Iris are starting, just blues right now. Betsy will have a few more of the amazing Anemones, mostly in pink but they are beginning to slow down. Fragrant Oriental Lilies! Bachelors Buttons and a few Ranunculus.

As a reminder if there is anything that you would like for us to hold for you at market just let us know by e-mail, by the evening before, and we will be glad to put it aside for you.