In my mind the first ugly, cold, wet weekend of the winter is always the first weekend in November.  Usually because it actually happens that way but it was imprinted on us 32 years ago this week when we finally moved into our “house”.  We had been living in a tent for seven months while we tended the first crops and began building a house.  The house was far from done, more like a big wooden tent but it did have a roof and walls and a woodstove.  The forecast for that weekend was the same as this coming Saturday, 40’s and rain, the thought of gritting it out under the tractor shed was not appealing so we moved in.  There was no insulation so we had to almost sit on the woodstove to stay warm but it was dry and a lot warmer than the tent would have been.

The first killing frost usually comes along just after that cold weekend too.  People always talk about the first frost when it gets below 32 degrees or frost actually forms on some surfaces and maybe damages some tender plants.  Statistically for the farm it is around October 21st but that is really of no concern to us.  Our defining line is 28 degrees that is when peppers and other warm season crops will actually die.  This weekend’s forecast has been warmed up some from 29 to 31 degrees on Sunday night but for us that is close enough to go ahead and clean off the pepper plants and call it a season.  Yesterday Jennie and I got about three quarters done, today we will finish.  One of the beauties of peppers is they hold very well in the walk-in cooler so we will be able to have them for several more weeks but Saturday will be the last day of pepper roasting.

No newsletter for the next several weeks as I will be out of town, in Jamaica.  Not a vacation, even though I am sure there will be some recreation involved.  I am headed down for a farmer to farmer exchange with a group of organic growers in the far southeastern tip of the island.  I will be staying at The Source Farm who is the lead in country to work with this group of over 40 farmers trying to diversify and improve their markets in Kingston.  Lots of stories to share when I get back but until then Betsy and Jennie will be at the Saturday markets while I am away. 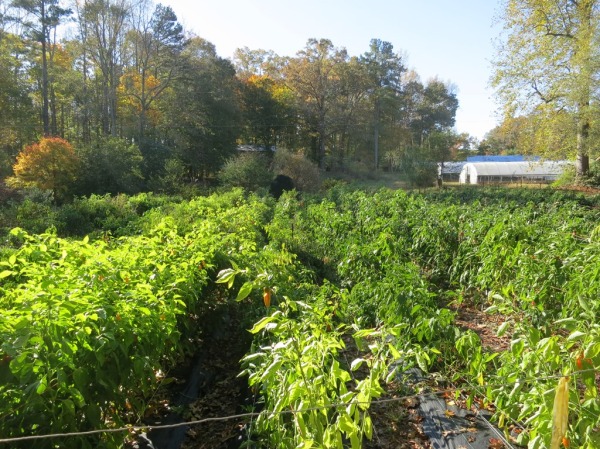 A beautiful fall morning and a very tired field of peppers

Market starts at 9:00 tomorrow, don’t be too early!  Looks wet and cold but come on, we will be roasting peppers and have lots of great produce.

Only a few more weeks of Peppers, fewer but still plenty of Red and Green Bells and some yellow too.  Red, yellow and orange Corno di Toros.  Peppers with little or no heat- Shishitos and Padrons for appetizers and Aji’s, the habanero without heat.

In hots less Poblanos and Anaheims but plenty of Jalapenos, Serranos, Cayennes, Picante Pimentos and a few Pasillas, Piquillos.

As a reminder if there is anything that you would like for us to hold for you at market just let us know by e-mail, by the evening before, and we will be glad to put it aside for you.

If you know folks who you think would be interested in news of the farm then please feel free to forward this to them and encourage them to sign up at the website.