First day of the Wednesday market for the 2018 season is today, 3:00-6:00, it looks to be a beautiful afternoon.  The mid-week market run by the Chapel Hill-Carrboro Farmers’ Markets, Inc. (that is our official name) has been at the Town Commons since 1997.  There has always been a mid-week market but it has moved both locations and days over the years and until 1997, was the Chapel Hill part of the equation.

The first location was at East Gate shopping center and was held on Thursdays from 1982-1986 and was a good market but the Food Lion grocery store began to object so it was moved to behind Mariakakis restaurant for two years until a better location could be found.  With the development of East Chapel Hill High School and the Cedar Falls Park across the street it was moved to the park in 1989 where at first it was on Thursdays but eventually moved to Tuesdays.  The mid-week market never really recovered from all the moves and when the Saturday market moved to its beautiful permanent location in 1996 we asked the Town of Carrboro if we could have a mid-week market there too.

We waited a year so we could settle the Saturday market into the new Town Commons properly before we brought the mid-week market over and became an all Carrboro channel.  The market organization did briefly operate the Southern Village market on Thursdays from 2004-2009, marking the return to a Chapel Hill location but it proved  not be a strong market so we once again consolidated our efforts back at the Town Commons.  Now 22 years later the Wednesday market continues to be a solid, if modest market day, with a great selection of vendors and products.  See you there! 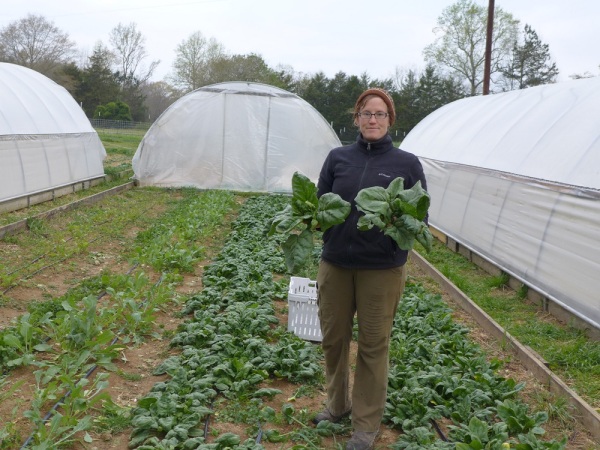 Some bodacious, tender and sweet spinach heading to market

The Ranunculus are really in their prime in orange, yellow and reds.  Anemones continue on with their delicate blues, pinks and reds.

As a reminder if there is anything that you would like for us to hold for you at market just let us know by e-mail, by the evening before, and we will be glad to put it aside for you.  Just so you know, sometimes not everything listed will be at the Wednesday market.

If you know folks who you think would be interested in news of the farm then please feel free to forward this to them and encourage them to sign up at the website.