A day late with the newsletter for good reason.  The heritage turkeys came yesterday morning and we were scrambling around getting the brooder house (a.k.a. Poultry Villa) ready for them.  Every year it is something new with this turkey thing.  This year there are problems between the US Postal Service and certain airlines, who carry the mail, about shipping live birds.  So we were not sure that we were going to be able to get these turkey poults from Texas until they confirmed that they had actually made it on to the plane.  That was Tuesday afternoon and we originally thought we had until Thursday to get ready!  So we scampered around until dark on Tuesday getting the brooder all cleaned out and disinfected and going to town to get feed and  bedding.  Yesterday morning I was putting the finishing touches on the Poultry Villa as Betsy drove up to the Post Office after they called at 7:00 to let us know that the the little cheeping box had arrived.  So here we go again!  70 two day old balls of fluff zipping around.  So far they are all singing and dancing amongst the feeders and waterers.  We plan on getting another 35 Broad Breasted Bronzes from a local source in about 6 weeks to round out the flock.

Cinco de Mayo today and to celebrate we got all of the hot peppers in the ground the last couple of days, now we have to get all of the sweet bells planted if it will ever warm up!  It is now official, this cool spring season is the worst we have had in over ten years.  So cool that even the cool season crops are holding back including the flowers!  For the first time ever we will not have the overflowing flower display at market for the Mothers Day crowds.  It is also holding us back a little on getting the rest of these peppers in the ground as we plant the sweet bells, no-till, into a cover crop that we kill by rolling it down.  The problem is the cover crop won’t kill/die if it is not blooming and because of the cool weather it too is delayed.  Additionally if we plant the sweet bells into the colder-than-usual soil under that cover crop they will just sulk.  We plant the hots into black landscape fabric, just as we do with the early tomatoes, so that the soil is warmer but the sweet peppers don’t need as much heat , usually.  So we are going to wait a week to see if warmer temperatures will finally settle in.  How am I going to bring out the pepper roaster on schedule if peppers are delayed?

The cool weather has some good points.  Because there is not a lot for the staff to harvest yet we are getting really caught up on all the other jobs around the place.  Everything is weeded (well almost) , irrigated and trellised.  We may have to break out the paint brushes and put a coat on the packing shed or something!  The Rhubarb plants finally came this week and we planted them quickly.  This is the third time we have tried Rhubarb so if it doesn’t work this time then destiny is not on our side.  I think we finally have learned from our mistakes and have it in the right spot.   Next year we will see if we were right.  The video crew from NC State came out on Tuesday to shoot for a piece on the farm for the on-line Agroecology course.  If it is available for the public to view I will give you the link when it happens. 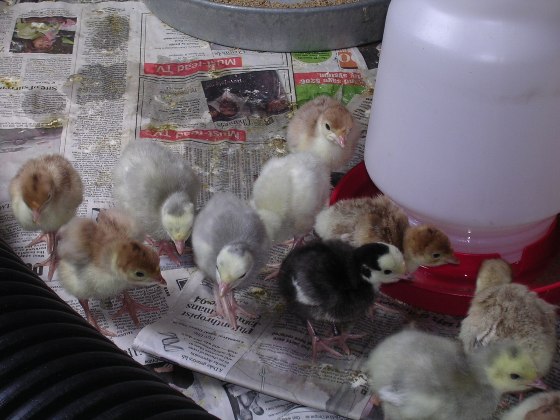 Bourbon Reds, Blue Slates and one of the black sheep Slates drinking and reading the N&O