This is one of those growing seasons that feels like death by a thousand cuts.  Now every year we have crops that don’t do well or fail completely and others that are magnificent and make up for the short falls, that is what being diversified is all about.  You hear farmers say something like “this year I lost money but we had a couple of good years in a row there, we have another bad one and we might lose the farm”.  For twenty three straight years we had always made more money than the year before, in the early years that was easy to do as we were so pitiful at the beginning the only way we could go was up.  The later years we were still figuring things out, building the business, settling on markets and crops to grow with lots of room for improvement.  Now that trick gets harder as we have pretty much settled in to a  routine, so when one crop fails, there is not a new one in the wings to surprise us.  For the last few years we have done well but not better than the previous best year, the thousand cuts are more of a psychological issue than a serious financial one.  They just begin to weigh on you, especially as it gets hotter and as I tell the staff “I begin to lose my sense of humor”.

The list of nicks is already long this year, the freeze took the blueberries and affected other crops in strange ways.  The unusually cold spring affected germination of many of the early direct seeded vegetables and flowers, we had to replant the first Zinnia planting when it didn’t come up, an eighth of an acre!  The drought in May made it hard to get crops established and others slow to grow.  No turkeys or asparagus this year either.  Then lately the varmit eating tomatoes and melon issue.  The most recent discoveries are that half the red onions are not what we had ordered (they will still eat well, just not what we wanted) and the 400 poblano plants that were looking so good appear to not be poblanos, but some kind of bell pepper instead!!!!  This too will change and the other summer crops look great.  The lisianthus may be even more fantastic than last years incredible crop.  We picked the first good batch of tomatoes out of the big planting Monday and they look good too.  The rest of the peppers are right on schedule and even the onions are bigger than last year (even if some of them are the wrong variety).  This adversity is what drives some people out of farming, they can’t take the unknowns and set backs, no matter how great the rest of the rewards are.  For us this is the challenge that keeps us getting up in the morning, trying to figure out how to solve a problem or learn yet more about how nature works.  Some days I just wish the box of band aids wasn’t out on the counter. 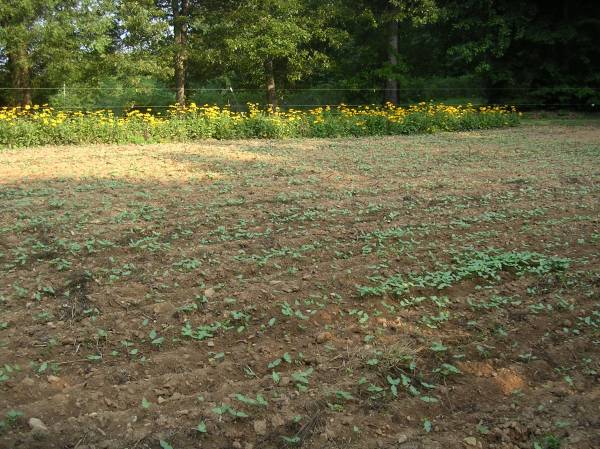 It did rain enough to get the summer cover crop up!  Cowpeas with the daisies.