Another sad passing and tick of the clock.  Sunday there was a huge gathering of the friends and community of Tony Kleese to celebrate his life and accomplishments.  Tony died way too young after a short battle with cancer but also after a life full of commitment to building a better agricultural system which you can read about here.

Tony was not quite as old as many of us old rats in the sustainable ag barn but quickly jumped in and became involved in so many areas.  We first met around 1989 when he was starting a farm east of Raleigh and we went to see it on a farm tour.  That farm did not succeed and he also farmed in the mountains for a while but he quickly learned that the best use of his energies was to organize and teach farmers.

We worked together on many projects over the years including the Board of the Carolina Farm Stewardship Assoc., teaching classes at and helping to form the Central Carolina Community College Sustainable Ag program, teaching workshops around the southeast together and he was the one who coaxed me into going to Jamaica to work with his Jamaica Sustainable Farm Enterprise project.  He even worked for us here on the farm for a short while in the early 90’s.

As many of us who, mostly inadvertently, helped lead the way to a more local and sustainable food system begin to age out or pass on it becomes ever more apparent just how fortunate we are in the southeast and particularly in North Carolina to have such a foundation of farmers, non-profits, researchers, organizers, markets and eaters who began to come together in the 80’s and work towards change.  Tony was certainly in that vanguard and will be sorely missed but his energy and spirt will live on. 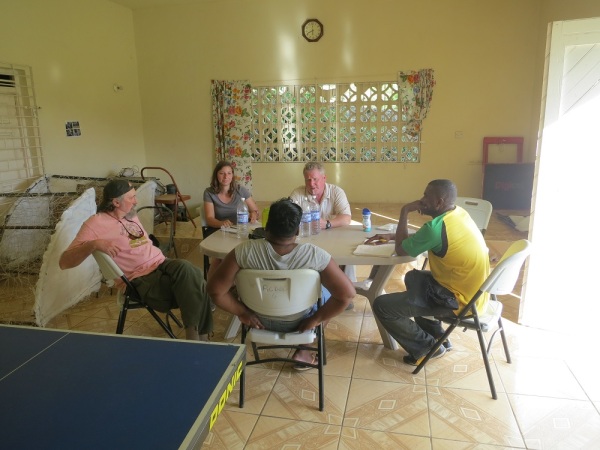 Classic Tony (in the middle) working with Jamaican farmers

What’s going to be at the market? END_OF_DOCUMENT_TOKEN_TO_BE_REPLACED

Wow what a difference a week makes!  I noticed yesterday (as I drove out the driveway on the way to yet another meeting) that the wild onions have started growing and this morning, as I wandered around, lots of things are waking up for spring;  blueberry buds swelling, the breath of spring and quince are beginning to bloom and more!  Betsy is beginning to wonder if I actually farm anymore or just go to meetings about farming.  This last five days has been non-stop.  The first market was enjoyable even though it always seems like we are learning to walk again, even after 20 years at the Carrboro Market.  We always view the first market as both a shakedown cruise to make sure we can find all of the market paraphernalia and to have time to visit with all of you before the season gets rolling so fast that we don’t have much time for conversation at market.

Sunday, Monday, and Tuesday I had a Southern Sustainable Agriculture Working Group (SSAWG) board meeting.  Fortunately this time it was in Pittsboro so I didn’t have to travel.  We worked hard and, as always, I came away mentally tired.   This is a great umbrella organization that does important work all across the South with family farms.  I encourage you to check out their website for all of the different areas that they work in www.ssawg.org .  I would encourage you as a supporter of local food and farms to consider making a donation to help in the important work that SSAWG does.  Our farm is the kind of operation that SSAWG is working to create, we have gotten lots of inspiration and ideas for our operation over the years from this group and we think that it is the best of the organizations that we work with.

The board meeting ended at noon and I rushed home to help plant eight more beds of vegetables before the impending rains and then rushed off to the Community College to teach a class on tomato production.  Yesterday I was gone again, very early, to drive to Goldsboro to give a workshop to a group of extension agents on crop rotation.  This is a bit unusual as I am the one who is usually sitting in the audience learning from them.  But this is the last one!  Today starts the beginning of the non-stop farm season!  Thankfully Joann started regular work Monday so at least something is getting done around here!  We are running about a week behind on one of the major projects of the spring season which is moving the “sliding” greenhouses and getting the early tomatoes planted (more on this next week).  Today we will begin the process by preparing all of the tomato beds for planting.  So I am off to the field…

Wow, that was cold!  Five mornings in the twenties with the nadir Sunday morning at 20 degrees!  Everyone wants to know what the damage has been to the crops but it is really too early to really tell about most of them.  The tomatoes survived with some severe freeze damage on the outside rows but they all should grow out of it.  The cucumbers look unscathed, amazing.  The dutch iris actually look great, Betsy has begun to cut a few. and we haven’t had any open completely yet but so far they appear to have no injury.  The big question is the blueberries.  That will take a week or more for the damage to be really apparent.  This freeze is very similar to the April freeze in 2001, when it was 24 degrees on the 18th with high winds.   That season we lost all the blueberries.  Most of the rest of the crops look fine, the sugar snap peas are burned a bit along with other odds and ends of crops.  Time will tell.

Monday I gave my last big presentation of the speaking season in Spartanburg, SC.  While I have traveled around the country quite a bit giving talks on all kinds of farming subjects it is these full day workshops that I seem to becoming known for.  This one, for 60 farmers and other ag related folks, is at least the fifth or sixth where I hold forth for an entire day, attempting to cover the entire subject of organic/sustainable vegetable production.  Can’t be done really.  The best part, is that after an entire day of examples and pictures I think they go away with the most important lesson: this kind of farming is an interrelated system where each action the farmer takes affects other things up and down the line.  Sure they go away with a big notebook full of information, and lots of details on soil management, how to control weeds and more but it is the big picture that I hope has become clearer to them.  It is hard to get a grasp on this complex system when you only hear someone speak for and hour or so.  I am currently working with the Southern Sustainable Agricultural Working Group (SSAWG) on a CD-Rom on Organic Vegetable Production and Marketing that is modeled after my full day workshops.  Now all of this is really just the Readers Digest version of the Sustainable Vegetable Production course that I designed and taught for five or six years at the Sustainable Farming Program at Central Carolina Community College in Pittsboro.  There I carried on for three hours a night for sixteen weeks!  Full immersion for sure.  Now the real benefit for Betsy and me to all of this is that the more times I have to explain to people how we farm, the closer I scrutinize why we do things in certain ways and, hopefully, we refine the system even more. 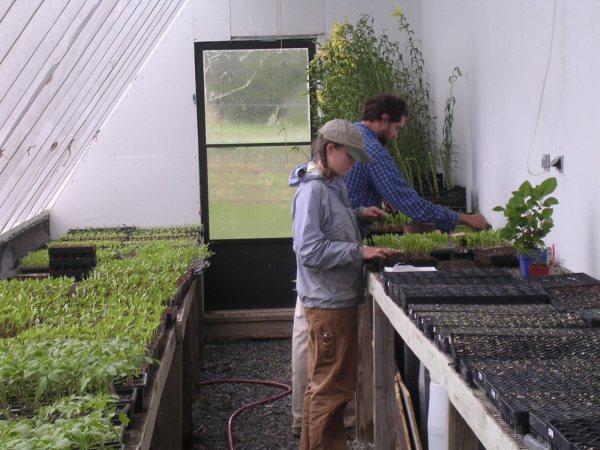 The perfect rainy day activity, moving up the 2500 plus pepper plants