A two week delay on the newsletter as last week we were moving fast and feeling a bit punch drunk from the fight.  The 21 degrees on the 29th was not kind to many of us farmers.  We had unexpected damage to some crops and others were just fine.  The most striking loss was hundreds of Ranunculus stems that were frozen half way up the and then just collapsed despite being inside the little tunnels, they are sending up new flowers but we are also heading towards the end of their season.

The weirdest injury was the Beets and Broccoli Raab were burned to the ground, never seen those cold hardy crops hurt in that way.  So last week we reseeded them in hopes that they will make it before the heat sets in.  Of course after the deep cold it turned hot and dry with high winds, hard to get seeds to germinate in those kinds of conditions so by the end of the week we had to set up irrigation on an acre of crops to keep them moving along.  This is that chicken on a hot plate time of year.

With irrigation comes rain and those were some terrific storms the last two nights.  Now things are wet enough that it has slowed us down on getting ready to plant the main crop of tomatoes.  It will happen but in the meantime we are in spring cleanup mode including finally taking all the bent steel from the big storm that ravaged the Big Tops in 2012 to recycling.  We are slowly getting ready for the farm tour in two weeks and the first step is tidying up around the place. 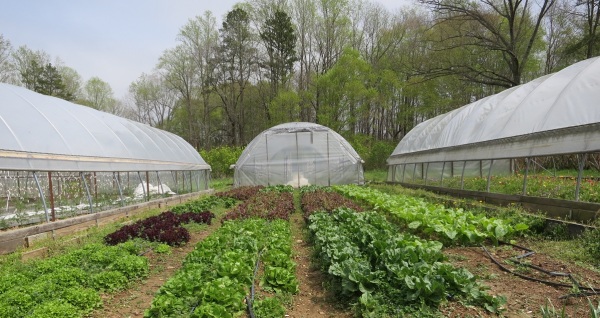 Early Tomatoes blooming on the left, lettuce for market tomorrow, Ranunculus recovering on the right.

What’s going to be at the market? END_OF_DOCUMENT_TOKEN_TO_BE_REPLACED