A slightly earlier newsletter this week because we wanted to let you all know that we will not be at the Wednesday Market this week.  Alex has a Rural Advancement Foundation International (RAFI) Board meeting this Wednesday and Thursday and we just can’t swing both things.  RAFI is one of the many organizations we have worked with over the years and it does incredible work in all areas of sustainable agriculture particularly agricultural policy and helping to save family farms.

The Farm to Fork Picnic went off without a hitch on Sunday and we had a great time with the folks from Pizzeria Mercato serving up a delicious cucumber salad from the beautiful cucumbers that Betsy picks daily.  It was great to see all of you that made it and many other new faces that we met.

The scary event this week were the back to back hail storms we had on Friday afternoon and evening.  In the 38 years we have been farming we have had few hail storms and never two in the same day.  The first had the biggest hail up to golf ball size and had us really worried for damages in the field but for the most part it was limited to some holes in leaves, you may notice some in Saturday’s lettuces.  It reminded us of the 1984 hail storm we had that beat up the blackberries so badly that we did not have a crop in 1985, thankfully it was not that big! 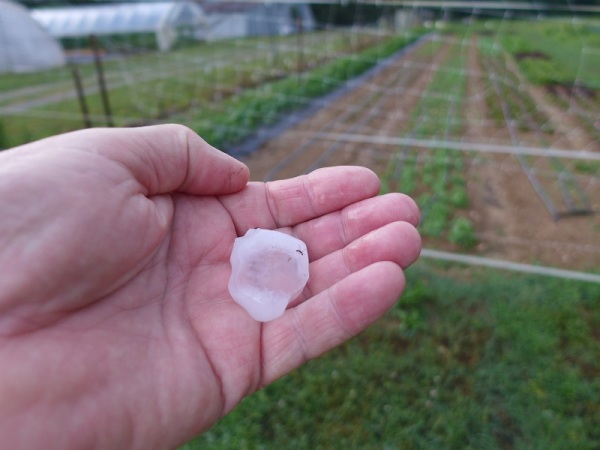 We slipped the bullet with these big hail stones!

What’s going to be at Market? END_OF_DOCUMENT_TOKEN_TO_BE_REPLACED

The Farm Tour weekend went beautifully but not without some excitement!  Saturday was it’s usual long day, up before 5:00 a.m. to go to market and then rushing home to throw the gates open for the visitors.  The afternoon was warm but pleasant and it was great to have time to visit with everyone.  Sunday was cooler and overcast to start but the folks came on anyway.  About 4:00 p.m. the sky looked very threatening and Betsy reported the radar showed a nasty line of storms coming at us.  Sure enough it pounded down for about a half an hour and then continued to rain for another half an hour or so.  Betsy and I were pinned down in the transplant greenhouse with some folks and our worst nightmare began, HAIL.  For about five minutes pea sized hail and larger came down.  I scampered out, as the lightning flashed, and rolled down the cold frame cover over the hundreds of tomato transplants and protected them.  Now we waited helplessly as we knew the potential damage that could be happening, a quarter acre of lettuce flashed through my mind, all of Betsy’s early season flowers.  In the end all looked not too worse for wear.  The lettuce does have some holes in the leaves from the hail stones but everything else looks fine.  Produce with a story Betsy says.

In our early years, 1984 or ’85, we had a tremendous storm come through in May.  All of our neighbors crops were hit hard.  Corn was blown down, tomatoes stripped of all their leaves, greens turned to paste by the hail.  We were in the blackberry business then and the new canes were growing vigorously at that time of year.  Even though they were up to five feet tall, they were still tender like an asparagus stalk.  The hail stones were big and hit with such force that many canes were broken off and others looked like we had beaten them with sticks.  Every one that was broken then sent out side shoots to compensate and those side shoots could grow up to 30 feet in a season!  All summer we worked to prune and manage those two acres of blackberries onto the trellises, trying to make a frame work that would make the next years harvest as easy as possible.  In the end it all turned out fine but the memory of that hail still haunts us to this day.

Busy week as we are still trying to catch up from Big Top construction.  The tomato Big Tops are done and covered!  This morning we have to cover two more bays, one for Betsy’s lisianthus and the other where NC State is planting their research tomatoes, tomorrow!  This afternoon the staff will be building the 1200 feet of trellis to hold up all the tomatoes.  Hopefully by tomorrow we can begin to tuck all the tomato plants into there respective beds.  The rains and warm temperatures really made things jump this week.  We did set up irrigation in the spring vegetables and the lettuce last week as they really needed it but the rains have really brought everything else around.  We moved up the thousands of pepper seedlings yesterday, a perfect overcast day to do it as it reduces the stress to the little plants as they work to send out roots into the new soil surrounding them.

Just covered Big Tops with the ladder still in place