Yep, it’s hot but not completely unheard of at this time of year.  If you look at the climate history for this area we have had temperatures in the 90’s as early as March and in the 100’s the end of May and in early June.  It is not what it should be though as the average high right now should be the low 80’s putting us 10 to 15 degrees higher than normal and for this many days in a row is disconcerting.

I have written before about the effects of high temperatures on tomato pollination.  Days above 90 and nights above 75 degrees cause a number of problems with pollen viability and its ability to move to pollenate.  Tomatoes are self-pollenating so this is not an issue of bees or no bees, but the pollen itself has to be good and the flower parts have to be able to receive the pollen.

This is all bad enough for field tomatoes but you put them under a tunnel, even one wide open and the temperatures jump more.  We have been watching these hot spells get hotter, longer and earlier in the tomato season for a number of years now and its effect on fruit set and consequentially fruit to eat in July and later.  For the first time ever we have covered our tunnel tomatoes with a 30% shade cloth to help with both fruit set but also the quality of the final product in reduced heat stress problems like cracking, sunscald and yellow shoulders.  Old dogs, new tricks.  Part of adapting to climate change. 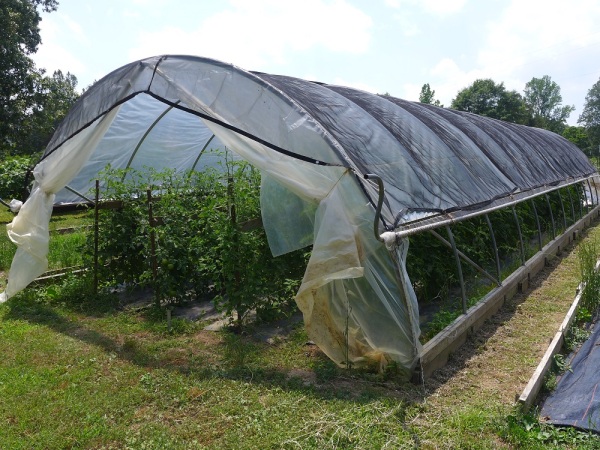 Looks cooler in there doesn’t it?

What’s going to be at Market? END_OF_DOCUMENT_TOKEN_TO_BE_REPLACED