Emergency trip to Wilson yesterday morning for tomato boxes, we all forget about one of the hidden parts of producing food, how does it get from the plant to the market table or the back of the restaurant or grocery store?  For all growers but especially small ones with limited resources, containers are a serious cost and hassle.

We all start out scrounging boxes from produce departments but you have to be careful that they are clean and not too torn up.  With the new food safety rules you not supposed to re-use cardboard boxes unless they have a liner.  New waxed boxes can cost up to $2.50 each and un-waxed boxes a dollar and a half or more. So every time you send a box off you will probably never see it again, especially wholesale.  Some of the restaurants will bring them back but mostly they go in the trash.  Even worse, the waxed boxes used for wet items like greens cannot be recycled or composted and have to go to the landfill.

Way back in 2004 we decided that the box chase and cost was too much and invested in food grade plastic returnable containers for all of our greens and other items that normally would go into a waxed box.  We knew that in Europe there were essentially no cardboard boxes, all we would see is plastic or wood.  After lots of research we ended up with our now familiar white crates with lids.  They were not cheap at $11.00 each but all it would take was to reuse them four or five times and they would be paid for in waxed boxes we would never see again.

Now twelve years later it has been fantastic, Weaver Street Market holds them for us to pick up at the next delivery just like they do milk crates or other similar boxes.  The restaurants hold them or bring them back to the next market.  It works great.  We do have to wash them between uses but that is far cheaper than buying new boxes.

We would love to find a plastic container for tomatoes that we like and stop using card board boxes but just haven’t found one than meets our requirements.  Because most of the tomatoes go to market or restaurants we almost always get them back and can reuse them many times before having to buy new ones so it is less of an issue and they can be recycled or composted too. 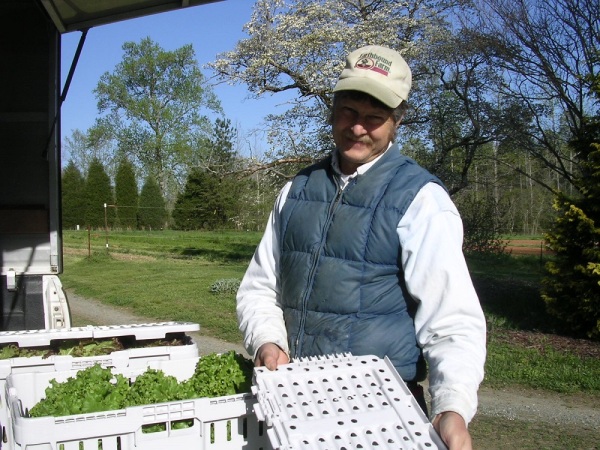 Lettuce in crates with removable lids

What’s going to be at the market? END_OF_DOCUMENT_TOKEN_TO_BE_REPLACED