Trellis week!  Over the years we have become semi-famous for our different systems to hold plants up for better utilization of space, more and cleaner fruit or long straight flower stems.  I have even done workshops at farming conferences on the subject.  For many horticultural crops it is a critical part of the production system but it also has labor and material costs that need to be scrutinized to be worth the effort.  Trellises need to be both fast to put up and fast to take down, including all the plant material that has grown up through the structure.

Some small tools are ubiquitous on all small farms- rakes and hoes, seed flats, hoses, 5 gallon buckets.  I used to say that 5 gallon buckets were the backbone of market gardens but for us it is the lowly metal T-post which is designed for livestock fencing but we have adopted for fast and sturdy plant support.  We have used them for blackberry and raspberry trellises, for tomatoes, peppers, peas, cucumbers, sunflowers, celosia and all manner of other cut flowers and yes we have even built deer fence with them.  We now have hundreds of them in 5, 6 and 8 foot lengths.

All of our trellises start with the driving of the posts into the soil about a foot deep and then various cross arms, wires, netting or fencing is hung off or attached to the posts.  In past years we would, annually, put in at least 600 posts and then pull them back out at the end of the season.  That was a lot of work but we would have 2-3 people working on it and it happened throughout the season.  Another sign of the more manageable Peregrine Farm is that we pounded essentially all of the posts for the year this week and it was less than 80 and there are only two more trellises to come with 16 additional posts.  Checking off those big tasks one by one. 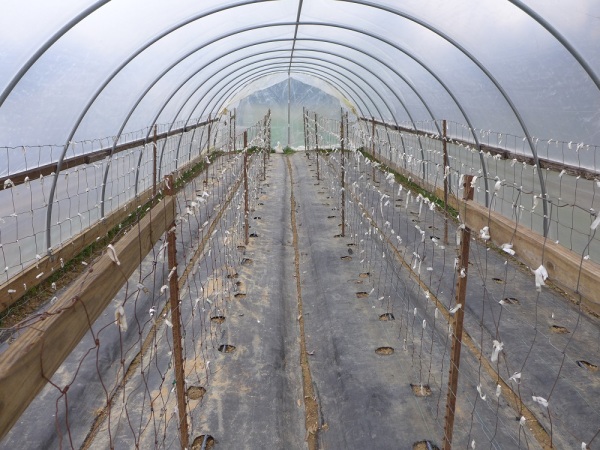 One of the tomato tunnels ready to go

What’s going to be at Market? END_OF_DOCUMENT_TOKEN_TO_BE_REPLACED

It is that time of year when we are both tearing down and restarting.  The big job this week has been removal of all the tomato plantings.  I always caution that it is one thing to build elegant support structures to hold up plants but one has to keep in mind that sooner or later those same plants will have to be taken out so the trellises need to be just as easy to take down as to put up.  It should not take more time to remove than to build.

Such is the case with our tomatoes, it takes a couple of mornings to get it all set up before planting and then months later another couple of mornings to snatch the plants off and pull out the fences, only dirtier.  After months of tending the plants Jennie and Liz are more than ready to be done with them and to move on to other crops so there is no reluctance in the effort, they always do a great job.

For the better part of a month we have been slowing planting for fall and winter harvest.  The intensity quickens during the next weeks when bigger plantings go in that will carry us all the way into January and February.  While the weather has been generally more conducive to getting plants established than most Augusts it is still a battle between heat, too much or too little water, weeds and insects.  If we can stay vigilant for the next month then the work will be much easier once the halcyon days of October arrive.

What’s going to be at the market? END_OF_DOCUMENT_TOKEN_TO_BE_REPLACED