What does local mean?  We are having this discussion within the Farmers’ Market right now because what seems fairly simple on the surface is not always so in todays agriculture.  The Carrboro Farmers’ Market has the tightest restrictions on this concept of any market we know of in the country.  We believe that our strict adherence to the rule that all products must be produced and sold by the original producer and that producer must live and produce them within 50 miles of Carrboro is the key to the great success of the market.  In the early days when that meant a farmer planted and tended tomatoes on their farm, within 50 miles, and then brought them, him or herself, to town on Saturday.  No middle men, just the farmer on their farm, then you the customer.  What makes it complicated is when further processing enters the picture, especially when it is something that takes resources greater than an individual farmer can reasonably manage.  Ever since our farmers have begun to produce and sell meat at market these once simple questions have become more complicated.  They raise that animal from just a few weeks old (or from birth) some times for years on their pastures.  In a perfect world they would then drive it only a few miles to a plant that can process it into not only various cuts but also other products that require further curing or cooking like bacon or sausages.  The problem is two fold, one there are only a few processing plants within the 50 mile radius of Carrboro and generally they don’t do any further processing.  Two, for the farmer to really make a profit from their animals they have to sell the whole thing, not just the pork chops, that means they really need to further process the rest of the animal.

The current debate is if that further processing isn’t also done within 50 miles then the product shouldn’t be sold at the market.  You know 50 is 50 is 50, doesn’t matter what the situation is.  One point of view is that those are the rules and the farmer can sell the products that don’t qualify somewhere else.  The other point of view is that these are products that are produced within 50 miles of the market by the seller and should be allowed to be sold even if they went off for processing and then came back (we are not talking about sending them to Italy or California, just eastern NC or South Carolina).  I guess the question really should be is what does “to produce” mean?  Is it that every last step in the process must be done by the farmer or the great majority of it?  The difference in the market could mean fewer kinds of products and fewer farmers.  It could also result in fewer customers for the rest of the farmers still at market, as some customers would maybe go somewhere else to buy their food, someplace that had a larger choice.  To me it is a matter of sustainability, as a member organization we need to make sure that our members are able to operate viable farm businesses as long as it is within our goals and mission.  We also need to view the market as a whole and make sure that it is viable too, if we narrow our product line so much as to lose farmers and customers then that is not sustainable either.  It is always something new and changing, I would be interested in know what your view of this is as well. 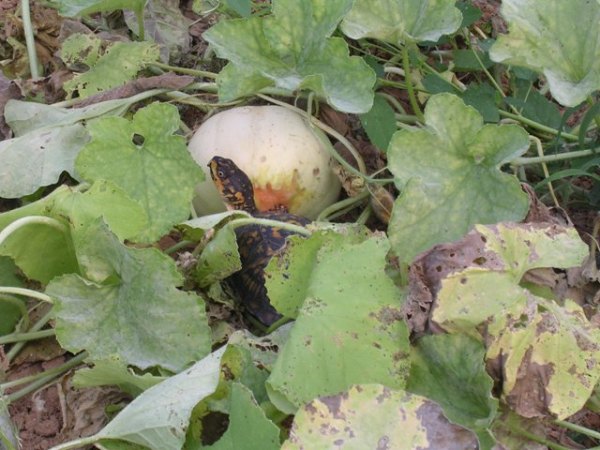 A hungry and thirsty turtle helping himself to a Charentais melon