Wow, has it really been a month?  We have moved heaven and earth (literally) around here to get things mostly to bed for the winter.  We took the turkeys in for processing and it is always a long and exhausting day, up early catching them before daylight and then watching over things at the processing plant.  As a whole they looked really good, a bit lighter in weight than last years but the quality seems good.  They are now down at the freezer plant sleeping until Thanksgiving.  Our focus then turned to getting the soil and cover crops ready for the winter and next spring.  Miles of pepper trellis had to be deconstructed first and the landscape fabric that we use for mulch in the hot peppers had to come up.  Then the endless tractor driving.

I spend more time on the tractor during this time of year than all the rest of the year combined.  Days and days of going round and round.  First all the remaining crops have to be mowed down so they will more easily till into the soil.  Before the soil turning begins I have to spread what ever mineral amendments the soil tests (that I took last month) indicate we will need to grow next years crops.  Not too bad this fall, only a bit of lime and even less phosphorus (P) and potassium (K).   Then the heavy metal comes out in the shape of a heavy disk harrow that cuts the soil a few inches and throws some of it over the crop residue.  Then a pass with the spring tooth field cultivator which rips and lifts the soil about every foot and about a foot deep.  After this lifting another pass with the disk to really cut those crop residues into the top soil.  Now the heavy work is done, the soil is loose but the tractor driving is far from done.  Any crop that gets planted before late April next year goes onto a raised bed, this is primarily so the soil drains and warms up faster in the cool of spring.  Without a raised bed it is almost impossible to prepare the soil for planting when we need to in February, March and April.  So round and round I go again with a four disk hiller, throwing up the loose soil into rough ridges.  200 beds raised  (20,000 feet and two acres) and another three quarters of an acre in what I call flat fields,  thankfully we don’t have to plant and take care of that all at once!  As Betsy says “It would make it hard to get up in the morning to face it”.  Finally it is time to spread the cover crop seeds.  On the tractor once again to spin out the grain crops, rye and oats, depending what cash crop will follow it, 400 pounds total.  On foot now I follow the grains with the legumes, hairy vetch and crimson clover,  to fix the nitrogen to feed the cash crops, using a chest spreader to spin them over the rough ground.  The rains came beautifully the day after I finished and the cover crops look beautiful. 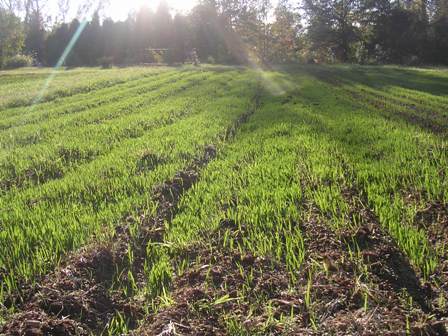 The last big project is to move one of the sets of “Big Tops”, the big four bay high tunnels that cover a quarter of an acre.  Need to get them out of the way so I can get that last bit of soil prepared for next spring.  We will reconstruct them in their new field sometime later this winter.  We did get all the parts down and moved out of the way, what remains is to unscrew the legs from the ground, today and tomorrow and it should all be done.  We have had a pretty good frost and the dahlias are blackened along with other scattered damage.  Betsy’s flowers for next year are going in, in small lots.  Larkspur, bachelors buttons, Gloriosa Daisy, the tulips are planted in their crates for the winter chill period.  The vegetables for Thanksgiving are really starting to grow, even the Brussels Sprouts that struggled in the late summer heat have come out of it and are putting on good new top growth.

My much anticipated hiking trip to Paria Canyon in southern Utah turned out radically different than we had expected to say the least.  Most of this walk is through very narrow slot canyons (some of the longest in the world).  It requires perfect weather because of the danger of flash flooding.  We new it had flooded two days before we headed in and that the forecast was for 50% chance of rain the next day but clear after that.  Eight of us started in down the muddy river bed only to be stopped after 4 miles by a rescue helicopter landing in front of us.  The forecast had changed and flash floods were a distinct possibility.  We were given no choice, we had to get out of the canyon.  At least several of us got a free helicopter ride over the incredible landscape.  That left us to come up with plan B for ten people.  We ended up in Zion National Park and had a great time in an equally incredible landscape, just not what we had planned so long for.  I guess I will just have to plan another trip!

So we are off Monday, to Italy, for the Slow Food Terra Madre conference.  We already have a full list of farmers’ markets we want to go see and people we want to talk to.  Our delegation will be blogging from Torino and Betsy and I are scheduled for Friday the 27th.  You can follow our groups experiences at the Slow Food Triangle website.  Also while we are gone you can eat some of our heritage turkeys and support our friends at the American Livestock Breeds Conservancy in Pittsboro by having dinner at Panzanella restaurant.  For the fourth year they are having a Heritage Turkey Dinner (with our turkeys again this year) and 10% of the proceeds go to ALBC.  Unfortunately we will miss it but you all can enjoy it for us.  Look for another newsletter from us just before Thanksgiving with news from Italy and updates on the pre-Thanksgiving market.  Until then remember the Carrboro Market is open until Christmas, so keep on shopping with the rest of the market vendors.