Betsy says if that was a vacation then don’t ask her to go again!  Mostly due to the potential of the incoming storms we worked our tails off!  Normally on August break we do a little farm work and then take it easy but between crops that had to be harvested and battening down the hatches we only really felt like we had one slack day.  Oh well only six weeks to go until the Big break.  Until Hurricane Fran in 1996 we didn’t even think about big storms.  It’s the wind that really has us jumping, with all of these greenhouses that are like big sails we have to be conservative when it comes to the forecasts for wind.  Now every two years or so we have a fire drill taking plastic off greenhouses and tying down all of the equipment that normally is just strewn around the farm like five gallon buckets and other light items.  This time the wind didn’t come but as you all know, as of early Saturday morning they were calling for up to 60 miles per hour winds.  Our “Big Tops” are supposed to take up to 70 mph but who wants to try it? So we uncovered them knowing that  the rain would then do such damage to the crops under them (the tomatoes for sure) that we would have a loss there.  This is not a drive the car into the garage kind of job, it takes hours and it can’t be windy so we have to make these calls a day or more in advance.  So we spent the better parts of Thursday and Friday securing things and then parts of Saturday and Sunday untying things.  Now believe me we are glad the storms did not come but it sure didn’t make for a relaxing break!

Other exciting news is that we are headed to Turin, Italy in late October for a first ever international small farmer congress being put on by the Slow Food organization.  We are honored to have been nominated by the local Slow Food group and then to have been accepted to attend along with 500 other producers from the US and a total of 5000 worldwide!  Slow Food is a group that originated in Italy, about 20 years ago, which is dedicated to the preservation and enjoyment of local, handcrafted foods like you find at market.  Every two years they have a huge exposition in Turin displaying and tasting artisanal foods from around the world called the Salone de Gusto.  For the first time ever they are overlapping that event with this congress of small producers called Terra Madre where we will participate in workshops and discussions on sustainable ways of producing great foods.  Incredibly they are paying for all of our expenses except for our plane tickets!   We have asked that they pay for half of our airfare so the local group is having a fund raiser next Wednesday the 25th at Pop’s restaurant in Durham.

Pop’s will donate a portion of the evening’s profits to Slow Food, and the donations will be used to offset the travel costs of two local farmers so that they can attend the Terra Madre conference in Turin, Italy in October. (For more info on Terra Madre, please go to http://slowfoodusa.org/events/terramadre )

We are excited about the possibilities of this trip and hope that we come back with lots of new ideas, maybe the next pepper roaster or something equally fabulous.  We will have more details in future newsletters. 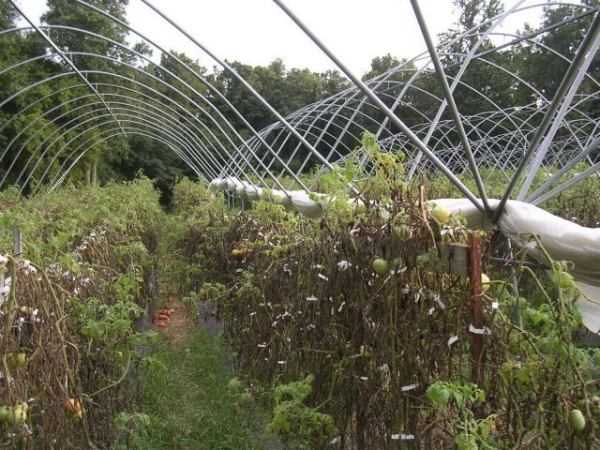 Tomatoes, now uncovered, succumbing to foliar disease from too much damp weather.