Pepper week, well mostly anyway. Seems like I need to look at the master schedule and move a few things out of this week for next year, way too much going on, in theory. It could be that things have just run together in such a way due to the late spring, who knows. Monday we had our usual harvest for deliveries and then covered the four Big Tops over the flowers as they are beginning to stretch and need trellising and protection. In between we did the final soil preparation for the hot pepper beds. Long day.

Yesterday I rolled and crimped the cover crop of rye and hairy vetch where the no-till sweet peppers will go. As opposed to the last few springs, the hairy vetch was blooming vigorously which will aid in it’s death. The ground is so hard, from the driest April on record, that I ran the sprinkler on the flattened cover crop for six hours to try and moisten the soil underneath so we have a chance to get the slits cut in it that will receive the plants. Today the guys will get the rest of the landscape fabric mulch on the hot pepper beds and get all of them and the eggplants in the ground. Perfect weather for transplanting peppers onto a synthetic mulch, over cast, warmish, light winds.

Tomorrow we will slit the no-till rows and begin poking the sweet pepper plants down into the thick cover crop residue/mulch. Twenty seven varieties this year, seven sweet types and the rest in hots and near hots. Can’t wait! Only 50 days until the first fresh peppers are at market and about 100 days until roasting begins! If you are interested here is an article on growing sweet peppers I wrote some years ago for Kitchen Garden Magazine, the techniques are the same, the varieties have mostly changed.

The turkeys have spent an enjoyable and dry week running in and out of the brooder and into the portable shelter that will become their new mothership when they move out to the field for good, next week. Sometimes these transition weeks from brooder to shelter are wet and cold and it is hard to let them out too much as their immune systems are not fully developed yet and the fear is they will get set back. Not so this week, plenty of sunshine and green grass to eat and play in, they are growing like the weeds in the garden. 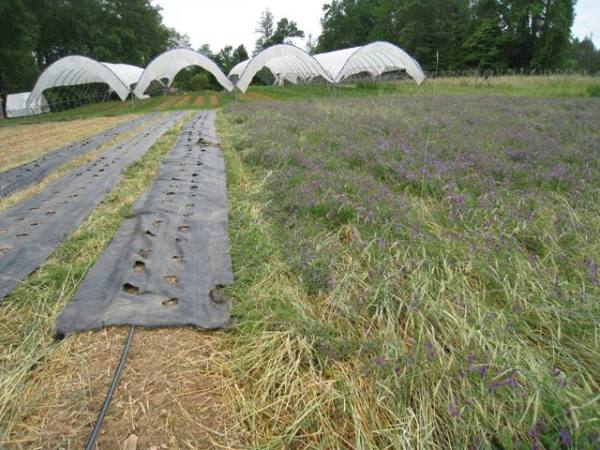 Larkspur this week, Betsy thinks it is the best looking we have had in years. Betsy’s beautiful bouquets. Sweet William (Dianthus) and Bachelors Buttons, the crop also looks great. Dutch Iris are back this week, some even in Carolina blue. The amazing, Energizer Bunny Anemones, keep going and going, but this is probably the last week.

Green Boston, Green Leaf, Red Leaf and Romaine lettuces are all in the house, maybe some more Red and Green Oakleaf too. Easter Egg and the spicy Chinese Radishes. Lots of the Japanese turnips. More spinach. Broccoli Raab has come on fast. Sugar Snap Peas too, not the best looking plants we have ever had, but the peas taste great. Another handful of those top secret Cucumbers we snuck in last week.